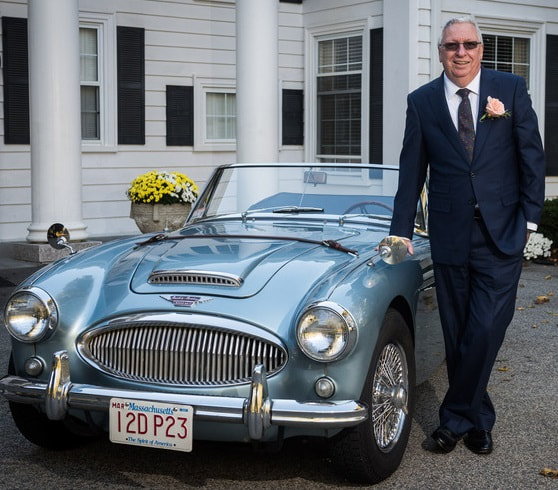 It all started with my first car in high school in 1967, a well-worn Bugeye Sprite bought from my cousin for $350.  There were magic summer days, cruising along the ocean, waving to other British sports car drivers, learning to heel and toe and inhaling the sweet smell of fresh-cut hay along the back roads of Southeastern Massachusetts.  The world of rally’s and gymkhanas opened up to me. Then there were the snowy days of winter with a car that didn’t like to start on the mornings I had an algebra test, a mouse-breath defroster that had me using an ice scraper on the inside of the windshield and a heater that would get up to maximum temp of one burning  match about 1/10th of a mile before I reached my destination.  I even tried to put a V8 into it, based on my extensive experience gluing AMT and Revell models together.  After a year, it was swapped for a more practical Volvo 122S, but I had Healey in my blood.

Soon after I married in 1977, my wife Elaine saw a bugeye in a local want-advertiser and said, “Didn’t you used to have one of those?”  Words she’s come to regret over the last 40-something years.  Looking for more info on restoring the Sprite, I saw an ad in Road & Track for the Austin-Healey Club of America, joined, and was referred to the Northeast Region of the AHCA.  I still remember the warmth with which we were welcomed into the club from the founders who became lifelong friends like the Woods, Payes and Smiths.  Cape Cod meets, Labor Day weekends at Lime Rock, and lots of cookouts have supplied wonderful memories.

I started writing for the club magazine, Chatter, and made new Healey friends world-wide when I began a newsletter/magazine exchange amongst the clubs.  A second Healey, a BJ7 that had been an SCCA racer, joined the fold and after restoring it I found it just didn’t have the performance to match its looks.  Truth is, I had always had a desire for a V8 Healey since seeing one of the local guys with one dusting off the muscle cars back in high school.  So out came the Healey lump and in went a Ford small-block and 5 speed that just makes me smile every time I fire up the motor of my Nasty Boy.
Since retirement, I’ve been able to take a more active role in the club.  I write regularly for the Healey Marque and probably spend too much time on Healey-related sites commenting under the name of HealeyRick.  As club vice-president I try to find ways to move our organization forward while respecting the roots from which we’ve come.  Healeys have brought so many great people into our lives and my goal is to see our club does that for others for years to come.