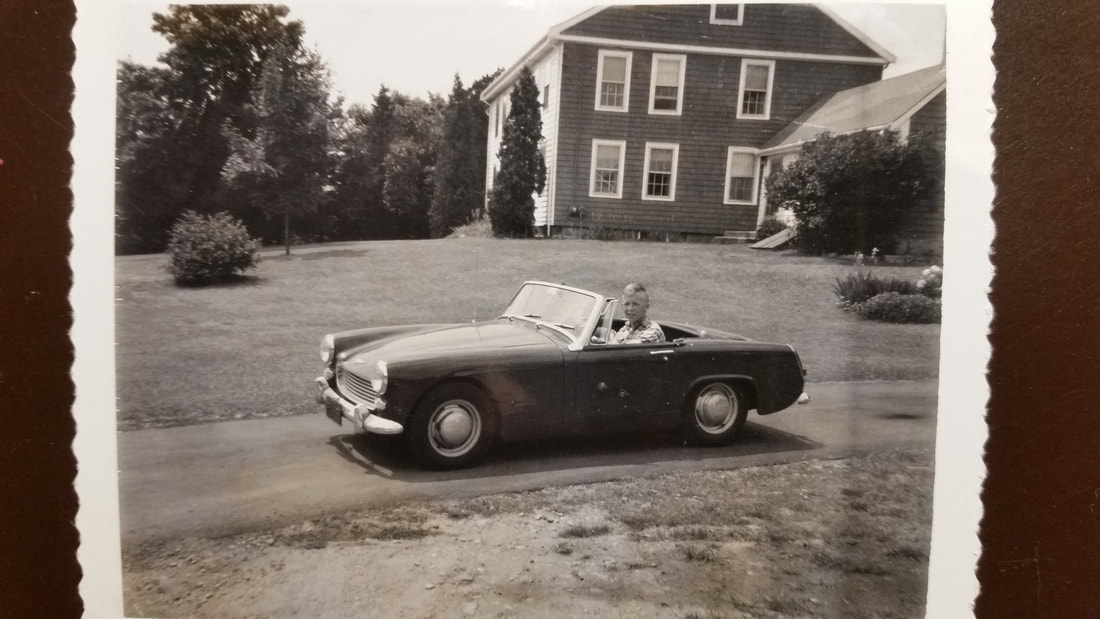 ​My interest in LBC’s started in the late 1950’s when my father purchased a well used Austin (probably A40) for his daily one mile commute to the train station.  My memories of this car include the odd little trafficators (unreliable but fun) and frequent trips to Goldie’s Junk Yard in Quincy, MA for the parts to keep it running.  Goldie’s Junk Yard was Mecca for foreign car enthusiasts and bargain hunters.  Filled with Austin's, Jaguars, Triumphs, MG’s, Alphas and Porsches in various states of disassembly.  Some of these cars appeared to have only minor body damage or mechanical problems. It still disturbs me to think that most of these cars were scrapped and sold by the pound fairly soon after they arrived at the yard.   To this day when I see a tired old British car I want to take it home.  The A40 was traded for what became a series of Hillman station wagons, the last of which was a new 1962 Estate Wagon.  About this time I got my driver’s license and my dad was turning fifty.  I figured no self respecting high school senior should be driving a Hillman station wagon and after all, this might be a depression era dad’s last chance to own a sports car.  Our local Roots dealer had a dark blue Sunbeam Alpine on the floor that was way over budget.  We looked at a cute little Triumph Herald but it really didn’t seem sporty enough.   MG was not well represented in the area.   Two towns away, however, a BMC dealer had a few Austin's on the floor.  The 3000 was way over budget but a 1965 BRG Sprite looked to be a good fit. Roll up windows, heater, and “scintillating third gear” as the brochure stated.  The Hillman and $1,200 sealed the deal and started my real time connection with LBC’s.   The following spring a friend joined the Navy and had to sell his 1954 Jaguar XK120 project car.  I paid him $200 on the condition that he helps me push it home.  By the end of that summer it became clear that the Jaguar restoration was more than I could handle and I sold the car for $400. The buyer drove it home.  With 100% return on the sale of my first car, I was now ready for a driver.  In December a 1958, AH 100-6 was listed in the local paper.  I purchased the car on the spot, with help from Bank of Dad, and drove it home in a snow storm.   The 100-6 served me well for two summers.  Graduating from college in 1969 pretty much guaranteed military service would follow.  I Joined the Massachusetts Air National Guard and headed for basic training in San Antonio, followed by nine months of specialized training in Wichita Falls, TX.  Returning home meant a real job and the 100-6 was not part of that picture so into barn it went.  With me out of the picture my dad bought a new Volvo and put the Sprite next to the 100-6.  Fast forward forty years, a wonderful, supporting (understanding) wife, antique house, travel, a wooden boat (now, blessedly someone else’s dream) a Model A Ford, and me in retirement provided the opportunity to reconnect with the two LBC’s in the barn.

The Sprite was freshened up with some new pistons, gas tank, rebuilt SU’s, ignition system and hood (top).  Still a work in progress but we have attended two Summits and have participated in several tours.   Driving the Sprite in traffic, especially around BST’s (big scary trucks) somehow seems more intimidating now than it did when I was a teenager.

​The 100-6 is getting an engine rebuild. The machine work is done. Really need to get focused on finishing this up.  Though the car was only ten years old when I purchased it, the floors, sills and rockers were rusted out.  In my youth I became a body expert using old road signs (I believe the statute of limitations is up), Bondo and pop rivets. This all needs to be addressed more professionally now along with the electrical system, mechanicals, hood (top) interior and paint.

I joined the Austin Healey Club of America in 1997 but only in the last few years have I connected with the New England Region. A big shout out to Steve Bell and Peter Sturtevant and others for making Jane and me feel at home from day one.
I feel fortunate to have joined AHCA and am pleased to have recently been elected as the New England Region, Vice President.  Look forward to getting back on the road this spring.  Social distancing in a Healey is a very pleasant way to spend a few hours.  Hope to see you on the road.