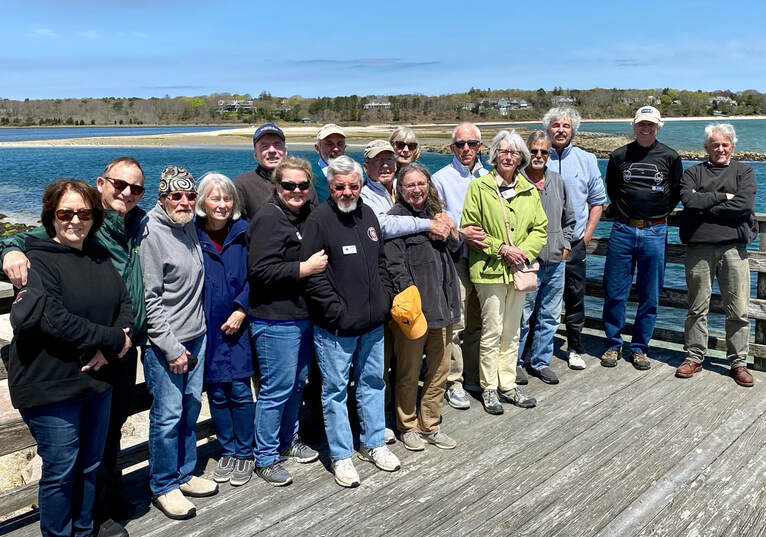 Sand and Dunes and Salty Air Tour May 4th & 5th Sandwich, MA
Nineteen members and guests participated in the Cape Cod Sand Dunes and Salty Air tour hosted by president and first lady Bruce and Jane Ketchen on May 4 and 5, 2022.  Six members signed into the Sandwich Lodge on a chilly damp Wednesday afternoon and later enjoyed a dinner of traditional Cape fare at the warm and cozy Sagamore Inn.

Thursday morning brought bright sunshine and chilly temperatures for our meeting at the Cape Cod Canal Visitors Center and restrooms where the tour was to start and end.  At 10:00 AM the tour departed for a ride along the historic Kings Highway to the first stop, the Sandwich State Fish Hatchery.  Thousands of Rainbow and Brook trout were spending their final days at the hatchery before being transported to local ponds and rivers for the season. Next stop, Titcomb’s Book Store. Titcomb’s is a wonderful old independent book store with a selection of new and rare collector books and souvenirs with a cape connection.  The tour continued meandering along the two lane Kings Highway past many beautiful eighteenth and nineteenth century homes.  The next stop was at Dowses Beach in Osterville where bright sun, sand dunes and salty air were at their Cape Cod best.  At Osterville we enjoyed lunch at Wimpy’s, famous for its Quahog Chowder and warm hospitality.
​
After lunch the tour continued along iconic cape back roads returning to the Canal Visitor’s Center where participants viewed a film and exhibits about the building and operation of the canal.   Here we bid adieu to those heading home and returned with overnight guests to the lodge where a Margarita or two and some single malt were enjoyed before walking next door to dinner at a local pub.  Think about joining the tour next year as this may become an annual event.